Due to freezing temperatures and undesired riding conditions, many motorcycle owners avoid using their bikes during winter, and they end up keeping them in the store or garage.

However, almost half of these bikes experience battery-related problems, with most of them requiring a new battery after winter. Have you ever taken the time to know what damages the batteries during this season? If not, you might not be the only one puzzled by this.

That’s not all, as you still need to know how to maintain a motorcycle battery during winter, how long a battery can sit before it dies, and the best battery for cold weather, which you will learn if you read on.

Why do Motorcycle Batteries Die in the Cold

Nothing gets motorcycle owners excited than the end of winter when they can ride again without getting exposed to too much danger. However, most of them end up being disappointed, as the engine won’t start. The most they can get are clunking sounds and failing electrics. The batteries are usually dead with no charge to start the engine.

There are four scenarios that result in damaged batteries during winter, and they include:

Taking proper measures to keep the batteries far from cold could help extend their lifespan.

In most cases, the motorcycle battery dies during winter because of one of these reasons:

Temperatures can get very low during winter, and you should expect them to go beyond freezing points. When this happens, your motorcycle battery is most likely to freeze, but there are some conditions for this to happen.

A battery dies after it freezes, and there’s no way of getting it functional once this happens.

Winter can be harsh to many things, including motorcycle batteries. Newer batteries can withstand such conditions, but the same cannot be said about older batteries. If your motorcycle runs on a 4-year old battery, it’s more likely that the battery might not survive winter, and it’s up to you to find a replacement immediately. Besides notwithstanding winter, older batteries also have a hard time maintaining the required charge to start a motorcycle.

A battery doesn’t need to be connected to a motorcycle to lose charge, as it can happen even when idle. The process is called a parasitic drain, and it most often happens due to a short circuit in the electrical components or accidentally leaving the lights on. The same can happen even when you’ve detached the battery, especially when it comes in contact with non-insulated materials. A winter season can last for months, which is enough to damage the battery.

How to Maintain your Motorcycle Battery during Winter

Winter might not favor motorcycle batteries, but that doesn’t mean you’re powerless to prevent their damage. With a little effort and knowledge, you can protect the batteries from the elements and make them usable once winter has passed.

Here’s how you do that:

We’ve established that poorly-charged batteries cannot withstand the freezing temperatures, and it would only make sense if you charge them 100% before winter to keep them functional after the season. Since a motorcycle battery requires a maximum of 8 hours to charge completely, you can do this in one night and save yourself the hustle and money of buying another one.

You don’t need to park your motorcycle in the living room, as storage or garage would do. Make sure it’s far from the freezing snow, and if possible, try covering it with something to keep the cold off.

If your bike has been experiencing poor wiring, it’s time to have the problem fixed before it costs you a battery. Poor wiring might result in a short circuit, which might trigger a parasitic drain. This problem is common with older bikes, and it’s best to have your bike inspected in case of wiring problems you might not know.

You don’t need to go anywhere with it, but regular startups would ensure the engine remains in optimal conditions and the battery gets charged to full capacity. Make it a habit to start your bike at least once every week.

How Long Does a Motorcycle Battery Sit before it Dies?

A fully-charged new battery can sit for three months before it dies. A semi-charged older battery might go for a month before it loses the charge and dies. However, it’s critical to recharge the battery every month when it’s idle to avoid damage. Hook it to a tender or use a trickle charger to keep it in great condition.

Which is the Best Battery for Cold Weather? 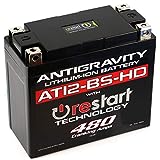 Lithium batteries are perfect for cold weather compared to acid batteries as they can withstand freezing temperatures. However, they too require proper maintenance and regular recharging to keep them in working conditions.

Before buying any battery for your motorcycle, it’s best if you discuss this with your mechanic and have them recommend the best battery on the market. They’ll also share some cutting-edge maintenance tips they believe will work for the battery.

Winter is not just harsh to us, but it also affects the motorcycle batteries. Batteries fail during winter because of freezing temperatures, parasitic drain, poor charge, or because they’re old. Make sure you start the motorcycle more often, charge the batteries, keep the motorcycle indoors, and fix any wiring problems to keep the battery in top shape. A battery can last three months before it dies, and lithium batteries are best for cold weather.