No road-going vehicle connects the rider to the road as a motorcycle does. It transforms the rider into a complex sensing instrument- experiencing and reacting to every feedback thrown at it. Manufacturers roll out multiple genres of motorcycles, but all ensure that their machines transmit every bit of information to the rider major of which happens through the handlebars. And if something staggers or distorts this information flow- the elation translates into an extremely irritating affair.

Hence if you ever ask yourself as to why my motorcycle handlebars keep moving, we look at 10 possible reasons that cause this frenzy oscillation of the handlebars. Technically termed as “headshakes” or more popularly “tank-slappers”. We’ve also suggested appropriate solutions and suggestions to fix that wobbly front on your motorcycle.

It happens to be the most common reason for turning your pleasant outing into a terrifying event. Negligence on the correct air pressure in your tires would not only cause instability in a straight line but also turn cornering into an unintended suicidal attempt. Low pressure heats the tires faster, causing premature wear and damage to the rims in case you happen to hit a rough patch.

A saggy front tire also reduces your control over the motorcycle when it comes to handling and braking. Lower than recommended PSI in the tires induces bounce and triggers a chain reaction that eventually travels to the other end i.e. the handlebars. You have no option but to grab the bars tight to control the front end as if trying to tame an out of control rodeo.

SOLUTION: Sometimes we’re too lazy to get little checks done on the motorcycle before a ride. Checking and getting the right air pressure in those tires hardly takes a couple of minutes. So next time you’re out on your weekend ride- it would be a good idea to inflate the tires to the correct pressure on the previous evening of the ride. It is also a good practice as cold air gives a more accurate PSI reading than hot air, which expands if you happen to top-up on the ride.

A simple solution is to get your hands on a small Portable Electric Tire Compressor (battery operated) as seen below: 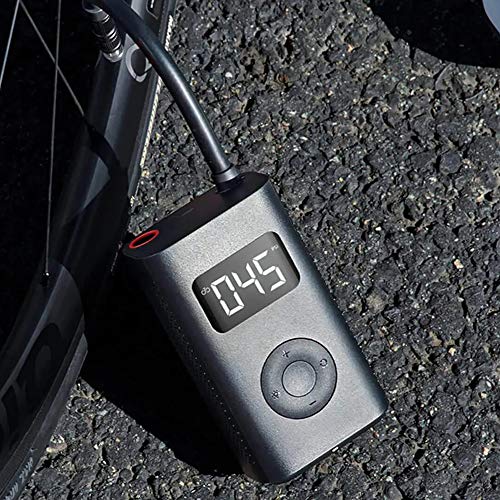 Another irritant that wrecks your peace of mind while riding. Uneven and ribbed surfaces throw you into an ice skating rink as you struggle to find traction. Loss of grip and slide at the rear tyre is still easy to recover, but any misadventure of the front is precarious.

Expansion joints and man-hole covers relent you to bring all your trail and motocross riding skills if any into practice to ensure that you and your machine come out in the same orientation that you dived in. Riders tend to tighten their grip on the bike for better control, but the outcome turns out to be the opposite.

SOLUTION: Avoid grabbing the bars as it takes away the ability of the motorcycle to correct itself. Don’t panic, reduce speed, and keep your upper body loose and relaxed while the lower part firmly anchored to the motorcycle- this should help you to get through easily.

Had a crash or a low-speed tip over recently? You need to get the fork tubes closely examined and trued even if it appears fine to the naked eye. Many riders rely on their eyes and judgment to evaluate and ignore the issue but keep wondering as to why the motorcycle has suddenly given up on-road manners.

The front suspension of a motorcycle is extremely sensitive to changes even if it’s in millimeters. This very ignorance amplifies into a hazard during high-speed riding and cornering. You would end up struggling to hold your line of travel and trigger a chain of riding errors. If that’s not all, a disoriented front also results in asymmetrical wear of the front tire.

SOLUTION: Though you may get the front examined after a crash, however, it is recommended that you still get it checked even if it’s a minor spill. You need not visit a technician- simply find a clean straight stretch of road, get to speeds which you normally ride at, and leave the handlebars for a few seconds.

If the forks have taken a hit and even marginally out of shape, you’d either find the handlebars shaking or the bike weaving onto one side. In that case, you should head to the service center and get the forks fixed.

Visually it’s easy to spot a bent rim if it’s a substantial one. However, for minor ones, you may simply stand on the pegs while riding- bend over the bars to check any wobble of the front tyre. Though minor bent rims might not be as alarming in behavior at moderate speeds going in a straight line but impart a jittery feel at high speeds and cornering.

SOLUTION: Get the rims trued at the earliest or if worse, replace them. Bent rims not only result in a jumpy ride, but the bend creates an escape route for the air pressure in the tyres. That’s another disaster in the making if not attended to. An added check would be to ensure that the bead breakers on both sides of the tyres are consistently spaced from the rim edges. 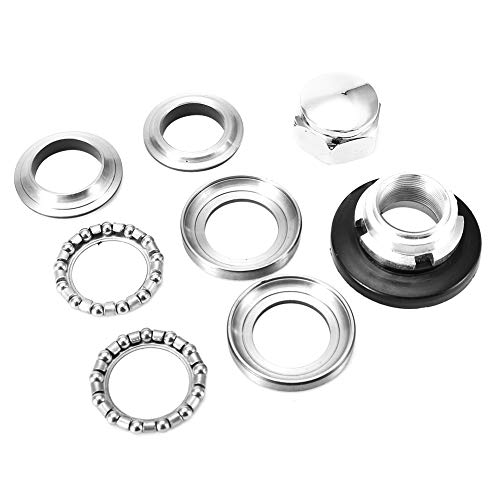 Bearings are remarkable pieces of engineering. They might be simple in terms of design and operation, but their tolerances to load and stress are staggering. They play a pivotal role in ensuring that your motorcycle treads the desired line of travel and the wheels roll without resistance. Worn out bearings not only make your motorcycle work harder to move but send the wheels into a dizzy- perennially struggling to hold their line.

SOLUTION: Just one-word “REPLACE”! They are cheap and easy to do so, rather it’s an easy DIY job if you have a front paddock stand or a hydraulic jack placed under the engine. You need to look up for the part number and conveniently buy it from a hardware store in case it’s not available at the service center.

Similar to bearings, cone-sets are pretty simple in mechanism yet operate under extreme stress. However, they aren’t as cheap as the bearings, and replacing them is a labor-intensive task. What makes it scarier to ride on worn out cone-sets is that the play amplifies at the wheels.

It makes you hold the handlebars even tighter further complicating the issue. To mitigate the play, a few people end up over-adjusting/ tightening the steering head. This over-adjustment is another dangerous reason which locks the handlebars at high speeds making it resistant to directional changes. Either way, it’s a recipe for disaster waiting to happen.

SOLUTION: Cone-sets do not wear out easily unless the play is being ignored for a long time. The steering races (steel balls) crack under the constant hammering or if not dents the cups which end up as locking spots for the races at high speeds.

Riding and cornering get extremely scary and risky at the same time. It is best advised to ensure that any minor play is adjusted immediately. It’s a good practice to have a ring spanner set in your kitty for the immediate adjustment of the cone-sets. The same can be carried along with while touring, more particularly on rides that involve riding through bad roads. Timely adjustment eliminates premature wear and extends the life of the cone-sets saving you time and money.

Modern-day motorcycles feature adjustable suspension to suit a variety of riding conditions. However, it takes a technically-informed rider to get the settings to perfection. Incorrect adjustment leads to disparity in function in both forks that eventually triggers a headshake. Improper settings also lead to cornering issues with the motorcycle hesitating to lean on a particular side.

SOLUTION: Acquaint yourself with the suspension settings and keep the user-manual handy at all times. If it seems confusing, the best you can do is consult a technician or the authorized service center. Never fiddle around the adjusters to get the desired setting. You might end up making the front even more unsettled. 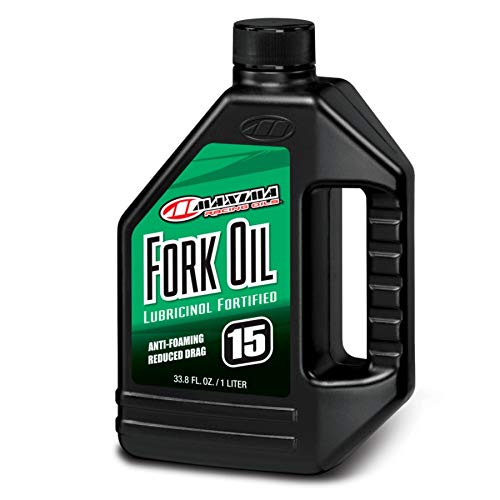 Oversight in putting the right and equal quantity of oil in the fork tubes leads to inconsistent damping putting both forks out of sync with each other. The tube with low quantity is least resistant under damping and recoils faster than the opposing fork. The front end of the motorcycle constantly tries to correct this variation, but the endeavor eventually fails, setting off a wobble.

SOLUTION: If the fork oil is not being replaced by an authorized service center, ensure that you keep a close watch on the quantity of oil being poured into the fork tubes. Also, its best is to let the technician know the exact measure of oil to be added into the forks.

Most technicians work on multiple bikes and at times tend to generalize the quantity required across different motorcycles. In case of personal purchase of the fork oil, it’s a good practice to simply write the quantity with a permanent marker on the container as reference for the mechanic in case he forgets the numbers.

This might seem an odd reason, but it does count as one of the factors attributing to a wobbling front end while on tour. A motorcycle needs an equal load of luggage on either side as an incorrect load leads to a see-sawing situation.

While it may be less pronounced on motorcycles with panniers, but saddlebags tend to bounce setting off a lateral imbalance. This not only unsettles the rear suspension, but this unnecessary vertical oscillation upsets the overall balance eventually traveling to the front end of the motorcycle.

SOLUTION: It’s advised to always sort and lay your touring essentials on the floor before loading up your panniers/ saddlebags. This enables you to identify the items and their weight to be loaded accordingly into the bags on either side.

Ensure that you load the heavy items first facilitating a lower center of gravity. Reserve the top box to carry light articles- any extra weight disturbs the overall handling of the motorcycle.

REASON 10: Gripping the handlebar too tight

This riding error is usually observed amongst new riders who tend to strangle the handlebars either due to riding over bouncy surfaces or simply out of fear. Holding the handlebars tight has the same outcome as over-adjusted cone-sets. The motorcycle feels hesitant to change directions and unstable even in a straight line.

Holding the bars tight is a sign of nervousness activating a panic response under urgent circumstances sending the motorcycle out of control. Modern high-end motorcycles feature hydraulic steering dampers to eliminate tank-slapping, but a strained hold on the motorcycle renders it useless.

SOLUTION: Motorcycling is a gratifying encounter and its best to be enjoyed with a relaxed mindset. The same also applies to your hold on the handlebars. Hence loosen up and enjoy the ride- it’s your beloved machine, don’t strangle it!

So that was our list of 10 things to do if you’ve always wondered as to why my motorcycle handlebars keep moving. We’re certain that the solutions mentioned would be an effective fix for your motorcycle’s wobbling front. We would strongly recommend to not ride your motorcycle in case of any technical reason causing the wobble. You should head to your nearest service center or technician to get the issues resolved before swinging your leg across again.

Motorcycling is akin to walking a tightrope and finding that right balance between risk and pleasure- it would be in your interest and safety that you do not let risks outweigh the pleasure part.