We’re going to start this article with what they taught you in school: the chemical make-up of rust is called iron oxide. Rust forms when iron and oxygen (go figure) react in the presence of water or air moisture.

Rusting, coincidentally, is also a commonly used term for the corrosion of iron. And it’s commonly used for a reason- a report from the FHWA reported that corrosion cost the economy $276 billion in 1998 alone. The damage causing this $276 billion is sustained by objects of all sizes- objects as large as ships and bridges, objects as small as steel pipes.

You’re probably wondering about how the above is relevant to the title of this article. We’ll tell you how.

What rust does to your motorcycle’s gas tank:

This especially happens to a lot of people in the winter.
Goes without saying that weather conditions forcing you to spend 2 hours a day shoveling snow off your driveway contain a lot of moisture. Moisture that can condense easily in cold temperature.

Moisture that can- gasp– cause problems in an environment facilitating the interaction between iron and oxide. This, as you know by now, results in the dreaded r-word.
But despite this, so many of us gloss over the safety measures required to protect our bikes from these conditions.

A lot of people put their bikes away for the winter without any protection. Come March, they lift the covers off their motorcycles, only to find their two-wheeled friends replete with rust.

If you’ve been reading up until this point, you probably have a lot of questions and concerns. And we’re going to answer most of them in the rest of this article. Starting with the one in the title.

*(LPT: Filling your gas tank with fuel makes rust less likely to happen because it results in less condensation.)

Do motorcycle covers cause rust?

If so, do motorcycle covers that prevent my motorcycle from getting ruined by rust exist?

When talking about motorcycle covers and rust, it can be a little confusing.

When most riders (and sellers) think about motorcycle covers, the first (and usually, only) things they consider are what it can protect the motorcycle against.

You know, external elements. Elements like dirt, sun, and most importantly, water.

This means that when you drape your motorcycle with a cover that is only, but not water-resistant (keep this word in mind because it’s important), it traps moisture inside. And this creates conditions for rusting.

So motorcycle covers that are not water-resistant can cause rust. And a lot of covers on the marketplace fall under this tag.

But you can get around this. And the solution is in the next answer.

Yes. Covers that are water-resistant

You probably figured out what they are, but we’ll still spell it out for you:
r-e-s-i-s-t-a-n-t.

Water-resistant covers aren’t just waterproof- the material is also made breathable on purpose to allow water to evaporate. As in, they protect your motorcycle from moisture both on the inside and outside. Sometimes, additional modifications such as vents and grommets are included as well for extra breathability.

How Motorcycle Covers Can Prevent Rusting

We’re going to preface this by saying that all-natural elements are bad for motorcycles (especially the paint) when exposed for extended periods of time. Which is why we recommend getting access to a climate-controlled garage during the winter (if you can).

Other things a motorcycle cover helps with:

Risking a dead battery
Motorcycles sitting idle for a long time can have their batteries run low. Storing your motorcycle indoors within reach of an electrical outlet you can hook its battery charger up to will help a lot.

Alright, a motorcycle cover won’t completely protect against theft. That’s what alarm systems and trackers are for.

But it helps a lot to cover your motorcycle with one and tether it to the floor- which makes it a lot harder to steal without kicking up a fuss.

What To Look For In A Motorcycle Cover

Do you plan on keeping it indoors or outdoors?

If you’re looking at a cover to store your bike inside your garage, then a dust cover (one that doesn’t trap moisture) is your best bet.

But if you don’t have an indoor shed or garage, a heavy-duty waterproof cover that protects your bike from both rain and UV rays is your best bet. You may also want one that helps keep your bike hidden from potential thieves.

What size is it?

Kind of a no-brainer, but you want to go with a cover that fits the size of your motorcycle. But if you’re in doubt, opt for a cover that is a size too big, over one that may be a size too small.

What material is it made of?

The material found in motorcycle covers varies in weight, thickness, and protection.
Polyester is a good bet because it usually beads water upon contact, and provides maximum resistance to rainfall or snow.

If you know you’re going to be dealing with rain at some point while riding your motorcycle, it goes with saying that you’ve to get a waterproof lining to keep water out. That being said, make sure you go through the cover when looking this part up. Many covers may be “water-resistant”. But that’s not the same thing as “waterproof.”

“Water-resistant” is what you want.

You want your bike cover to protect it from moisture on the outside, but be breathable enough to allow the dissipation of moisture from the inside.
So keep in mind: if water can’t get in, it can’t get out either. And the latter creates the perfect recipe for rust.

Is it UV ray resistant?

UV rays are often used as a catch-all term for anything related to sun rays, so we’re going to preface this by saying that “UV-resistant” doesn’t mean that cover prevents your motorcycle from getting hot.

It means that it blocks all damaging rays from the sun that break down rubber and plastic.

Can it be well hidden?

The last thing you want is for your motorcycle to look flashy to potential burglars while parked outside unattended in a shady neighborhood.

Even though most people would raise their eyebrows at “anti-theft” when you bring up motorcycle covers, there are covers that are designed specifically to blend in with the (usually dark) surroundings. And thieves are going to be less likely to scope out your bike if they can’t see it in the first place.

This also means that you don’t want a motorcycle cover that is flamboyant.

Our 3 picks for Motorcycle Covers 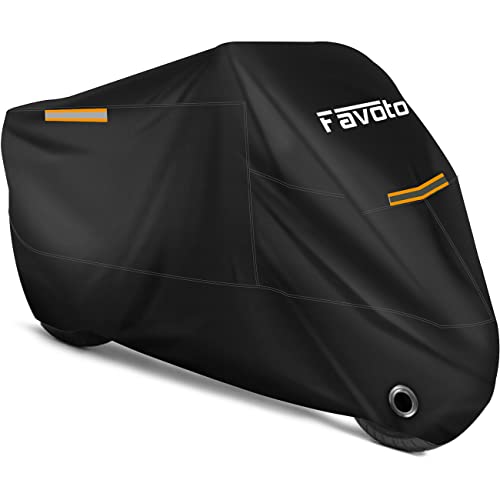 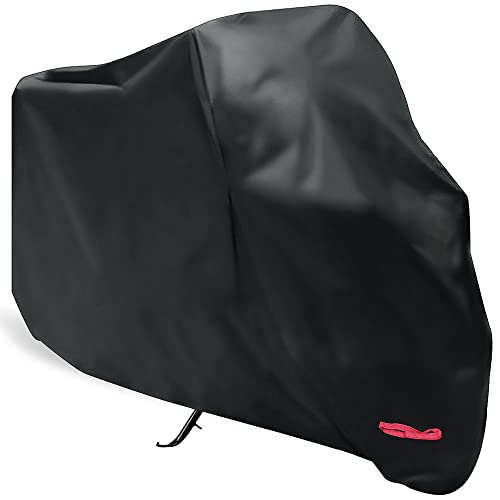 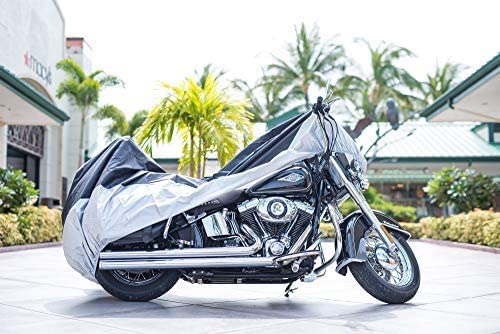 As we said earlier, rust formation on your motorcycle can lower its fuel economy, impede fuel mixing, and clog its filters enough to cause pressure build-up. Also, it can ruin how it looks.

You don’t want that to happen.

Which is why, for your knowledge, we’ve covered in this article:

The reason we write these articles is that despite having so much information at their fingertips, most people don’t do the requisite research- and this can end up taking a toll on your motorcycle.

And within the context of this article, that means preventing that dreaded iron oxide from ruining your two-wheeled best friend.