For many people, a motorcycle is a cherished vehicle. Like many vehicles, motorcycles are liable for overheating problems that can run down a bike and cause it to stop working entirely. Motorcycle owners are always looking for answers for overheating, and many of them search the radiator.

While there are multiple causes for overheating, do motorcycle radiator guards cause overheating? Putting the guards on the radiator will cause the motorcycle to run a few degrees hotter. However, issues with the cooling system all around, and water in the radiator contribute to overheating. This is why radiation braces are a popular choice to combat overheating.

That being said, keeping an eye on your radiator is important in a motorcycle. This article will explain what to do when your motorcycle overheats, how radiator guards contribute to the temperature of the bike, and how to take care of the engine cooling system in the event of the motorcycle overheating. 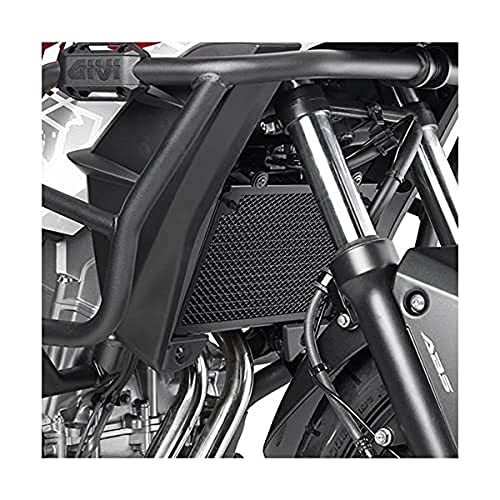 The purpose of radiator guards on motorcycles is to protect the engine from debris or anything else getting in the way. Radiator guards are installed to defend a motorcycle’s radiator from leaks, holes, or the function of the bike. Coolant and oil may drip through caps and interpose with tires, which threatens the security and performance of a bike (source: Chap Moto).

Even if you aren’t using your motorcycle for riding rough terrain, it’s important to check on your radiator for damage. A guard will protect from stones and debris, but it will also protect other areas of your bike. Since the radiator is located at the bottom of the bike and near the front tire, the rubber from the tire can also get into the radiator.

According to Just Bikes, “Damage to your bike’s radiator and/or oil cooler…can decrease performance. Airflow through the radiator/oil cooler is decreased, which in turn decreases cooling efficiency, leading to potential power losses. If the radiator/oil cooler cops a big enough hit, it can lead to a loss of coolant/oil. This can leave you stranded by the side of the road or, worse still, result in engine damage or even a nasty crash.”

Now we know that radiators overheating leads to the motorcycle malfunctions and a lesser performance, something that is irreversible. The guards on the radiator don’t solve the issue of overheating; some customers find that certain radiator guards increase the temperature on their bikes. This increase in temperature causes riders not to purchase guards, although they’re necessary for keeping the radiator debris-free.

Many riders post on forums asking about what to do with radiator guards overheating. Some users suggested that issues with the tank shroud connect to the overheating. Others noted that the coolant is the main concern.

Overall, plenty of users said certain brands of radiator guards don’t cause issues with overheating, and that the phenomenon of the motorcycle increasing in temperature is related to the radiator itself. To be on the safe side, some riders use radiator braces to ease the risk of temperature increase while keeping the radiator safe.

Aspects to consider whether radiator guards cause overheating are the restriction of airflow into the radiator and the transfer of heat back into the radiator. According to one user on the R1 Forum, “If air is being restricted the result will be increased temperature. The guard should help this by creating a transfer of thermal energy to the guard, but if air restriction is greater than the thermal transfer, then the only benefit is keeping the occasional rock out of your radiator.”

Can I Cool Down My Radiator with Water?

Ideally, no bike rider wants to replace their radiator, ever. They’re a costly fix and there are many ways to prevent a busted radiator, such as guards. It’s much easier to cool down a radiator, and there are multiple ways to go about this. Some users suggest water does the trick, but how true is that?

Distilled water is the best option for cooling down radiators because of the purity of the water. You don’t want to put extra chemicals and minerals in the radiator that will cause the engine to collapse and corrode. Water levels are crucial in this case to prevent further leaks, especially in the radiator caps, head gaskets, and water pump seals.

The best option is to use a coolant to fix the temperature in the radiator. According to Motocross Action Magazine, “Most coolants use ethylene glycol as the main ingredient. This alcohol-based fluid can raise the 212-degree boiling point of plain water by as much as 60-plus degrees. This coolant is also called “antifreeze” because it drops the freezing point down to the minus-80s. Inhibitors are also added to coolants to control corrosion.”

While radiator guards can contribute to the overheating of the engine, radiator caps can help cool down the system. The secret is in controlling the pressure of the coolant, which the radiator is supposed to do. Radiator caps are meant to stop boiling the engine and allow the motorcycle to operate normally while running at high temperatures that cause the motorcycle to shut down normally.

How Do You Know If Your Bike is Overheating?

In the case where radiator guards don’t cause overheating, it’s a matter of what other possibilities can cause the temperature to increase in the motorcycle. Steam coming out of the radiator is an issue that needs to be addressed right away, and not paying attention to it can lead to irreversible damage to the engine’s cooling system.

Some causes of an overheating bike, other than radiator guards, include:

According to Motosport.com, “If riding, don’t expect to notice the fluid dripping but most certainly you can feel the hot case. Depending on conditions and how hard you ride, you might have five minutes or even an hour but consider your time up in about 15 minutes if you plan to gut it out.”

Radiator guards can cause overheating in motorcycles, but they aren’t the main reason for temperature increases. Instead, radiator guards provide more of a benefit to the engine than harm. The purpose of a radiator guard is to protect the engine from anything getting stuck in there, leading to issues with its function. This includes dirt, rocks, sticks, rubber from the front tire, and much more.

It comes down to the cooling system; riders must check up on it constantly to ensure that their motorcycle runs smoothly. Using the right coolant or distilled water in the engine can reduce the temperature, while radiator caps and braces help keep the bike functioning at higher temperatures.