Chaps are pretty commonplace today. They look badass, keep you warm, and keep road rash at bay. But the ancestors of the modern motorcycle chaps were born a long time ago. A time from when cowboys tended to cattle on vast ranches in North America.

A History Lesson On Chaps

The myth of the cowboy has been romanticized to varying degrees by most modern Americans (most of whom have been nowhere near a horse).

In the 50s, it was portrayed in the form of the Marlboro Man, one of the most brilliant advertisements of all time. Presenting a lineup of sea captains, weightlifters, war correspondents, and other hypermasculine figures,  the ad transformed the feminine image associated with filtered cigarettes prior to this. The cowboy was the first among this series.

Today, it is most visible in the form of Red Dead Redemption 2, a stellar video game about a group of outlaws on horseback evading government forces and rival gangs. The vast open-world and various quests and cut scenes featuring intense adventures are largely the reason for its critical acclaim.

Both portrayals have overlapping themes-  freedom, rugged masculinity, adventure, and wild stories. These themes of the stereotypical cowboy are present not just in media such as advertising and videogames, but literature and cinema and even politics (Teddy Roosevelt, anyone?).

But the reality of being a cowboy (much like most things romanticized) was, for the most part, boring.

There’s a reason the word “cowboy” is a portmanteau of two words that define “young man” (boy) and “cattle” (cow). Because the vast majority of cowboys were young men who needed cash. And they made this cash by herding cattle.

Which is just as exciting as it sounds.

But even though the job was mostly mundane, it included having your legs come into contact with heavy brushes while you were on horseback or doing rough work with livestock. A lot of contact.

Because the land cowboys worked on was full of thickets and other pointy things, it really hurt your legs when passing through them.

The first cowboys (known as “Vaqueros” in Spanish) were hired by ranchers to tend to their livestock, way back in the 1500s. They were known for their superior roping, riding, and herding skills, and tended to large quantities of cattle. The earliest forms of protective leather used by the vaqueros who herded cattle in Mexico were called armas. Armas were two large pieces of cowhide that were bonded together and used as a sort of protective apron. Attached to the horn of the rider’s saddle, they were spread across the horse’s chest as a tether to the rider’s legs. But this wasn’t very effective, as it would often slip off the horse’s chest while being ridden.

But as the vaqueros moved up north into the Pacific Coast- all the way up to the Canadian Rocky Mountains- they saw a variation in the design of their leg protection that corresponded with the variation in climate and terrain. For example, one of these variations was borrowed from the Native Americans in the form of leggings.

And over time, these armas were modified and improved into what is today known in Spanish as chaparejos– a pair of leather trousers without a seat- that were worn over ordinary trousers. The word “chaparejos” was derived from “chaparros”, which is a word used to denote very rough, dense leaves.

While it’s difficult to ascertain the time period of the first usage of the modern leather chap by American cowboys, they were used en masse by the late 1870s by Texan cowboys as the cattle industry moved north. In fact, the Dictionary of American Regional English (a record of American English as spoken in the United States from its beginnings to the present) notes the use of the word “schaps” in Wyoming, by 1884.

The most popular design of the chaps by Texan cowboys was often called “stovepipes” because of the straight and narrow leggings. Each side was cut from one piece of leather and wrapped completely around the leg. It also had a full-length zipper down the outside edge. Fringes were present on the edges over the leggings that were already cut to fit over the boot.  Because they fit so snugly, these chaps were better at trapping body heat, a boon for herding cattle in windy and snowy or cold conditions.

Half a century later, in the early 20th century, these “shotgun” style chaps found their way into motorcycle PPEs and the biker subculture as a whole.

What is the anatomy of a motorcycle chap? 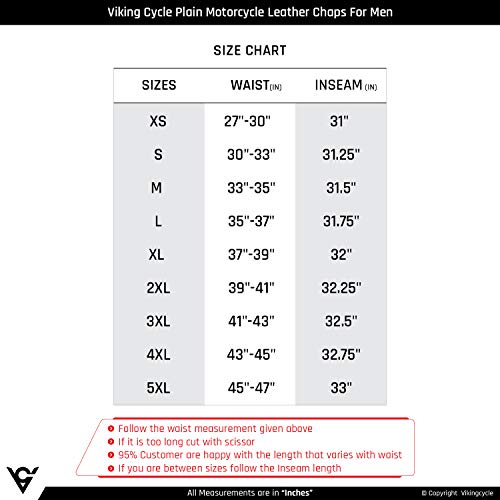 Modern motorcycle chaps, derived from the equestrian chaps mentioned above, come with the following features:

How To Wear Chaps 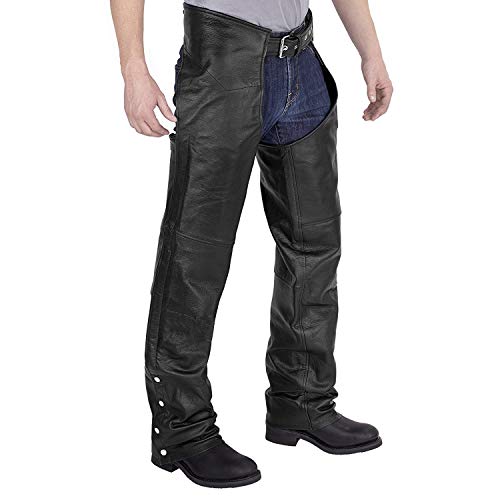 i) Put the belt on first, after which you adjust the buckle

Now, where you place the belt of your chaps with relation to your pant buckles depends on your height. Taller folks are better served wearing the belt below the pant buckle while those of shorter stature can do the opposite.

ii) Bring the chap through the leg and back around

Doing it this way is much more efficient than inserting your leg into the chap after zipping it first (because it won’t fit comfortably around the thigh). This is because the openings of the chaps start from 2/3rds of the bottom of your legs.

iii) Zip down until you reach the button snaps

After which you do the button snaps to accommodate your footwear.

You’re probably wondering about what the difference between motorcycle chaps and motorcycle pants is. Because reading up until this point, they probably sound the same. And it’s easy to see why: both are (usually) made from fine leather and cover the bottom half of your body.

But there are some major differences, and depending, what you want your lower leg protection to be about, you’re going to prefer one over the other. Which is why we recommend buying and keeping a pair of both.

The major distinction between chaps and pants is that motorcycle chaps are meant to be worn over what you’re wearing on your legs already, motorcycle pants are all that you wear on your legs.

The weather is not very cold where you ride

While leather chaps are good at keeping you warm against windy, chilly weather, they don’t cause overheating in slightly warmer areas like leather pants sometimes can.

If you intend on spending a lot of time walking

Again, this depends on the weather (for the reason mentioned above). But, generally speaking, chaps win over pants in this area.

If you enjoy walking and intend on making stops on the way to your destination (which you probably do if you’re riding to a national park or beach) or tend to make frequent pit stops, you want to go with motorcycle chaps.

You can easily slip your chaps off because you’re always wearing something underneath. This is especially useful if you’re riding to the beach and want to wear shorts (as opposed to lugging around in leather pants).

If your daily commute involves a motorcycle

If you ride to work every day, getting motorcycle chaps is a no-brainer. No one has ever worn leather pants to a cubicle at their 9-5 without their coworkers making fun of them or exchanging weird looks.

Even if you’re considering wearing them until you change into work clothes, you’re going to waste an extra 5-10 minutes you could have spent on a coffee or quick breakfast. Not to mention the stickiness (your legs are going to get sweaty while you walk from your motorcycle to the changing room/ washroom).

With chaps, all you have to do is slip the thing over your pants or jeans, zip them down and keep them in your saddle/ bag. Neither entry nor egress is going to take you more than 20 seconds.

Why Motorcycle Chaps Are So Great 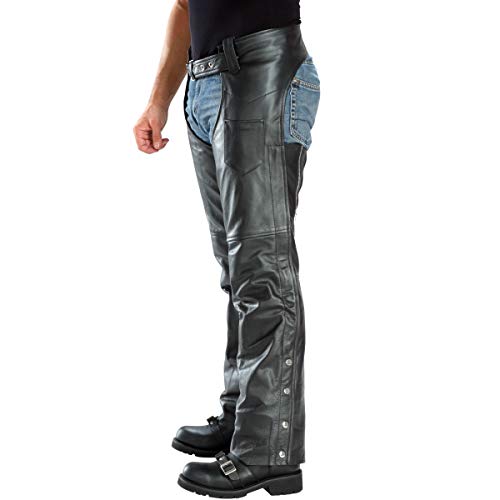 Once you get used to wearing and the “breaking in” of your first motorcycle chaps, it’s ridiculously easy to slip your motorcycle chaps on and off. Because after zipping it all the way down and unbuttoning the bottom snaps, you’re basically wearing a kilt. Many chaps come with zipper pockets too, which is much better than having to reach into your saddlebag every time.

When compared to other motorcycle legwear PPE, leather chaps don’t confine your legs nearly as much. Due to their composition and size, motorcycle chaps have optimized ergonomics.

Your legs are safe

You can say goodbye to road rashes with these bad boys. Motorcycle chaps provide adequate abrasion resistance and impact protection to your thighs and legs.

They’re made to last

This has more to do with the leather, but provided you don’t cheap out on your chaps, they’re going to last you decades (stressing on the not cheaping-out part). But make sure to do your homework, because it’s easy for people to get duped into buying fake leather products online. A safe bet is to go with something well-known and well-reviewed, such as Street And Steel (or any of these other brands).

Now, it depends on how cold it is where you ride. If it’s Minnesota-in-the-winter cold, you’re better off with leather motorcycle pants. But in non-Tundra levels of cold chaps are much better for you. Especially if it’s cold AND windy.

Motorcycle chaps can be worn in wet weather too. Rain pants exist but they burn up on the pipes, make a squishy sound everywhere you go, and tear easily.

Motorcycle chaps hit the sweet spot between protection against wind, weather, and chill. They’re basically good at intermittent protection. But if the climate leans towards the extremes in any of these factors, go with something more specific.

What to wear under motorcycle chaps

Considering that motorcycle chaps are meant to protect your leg while also easy to quickly take off when stopping somewhere for breakfast, you can wear a lot of things underneath your chaps. But as chaps don’t cover 100% of your lower body, they are well complemented with protection for the two areas they don’t cover- your knees and butt.

Which is it’s a good idea to wear the following with your chaps, things that provide enough abrasion resistance to your knees and butt in the case of an accident (touch wood).

Note: Why leather chaps?
You’re going to see the word “chap(s)” be preceded by either the word “leather” or the word “motorcycle” in this article. And that’s because, in the context of this article, both phrases are interchangeable. i.e. while Nylon, Kevlar and Fabric chaps exist, when we say “motorcycle chaps” we mean “leather motorcycle chaps”- because leather chaps are by far the most in number, and offer the most utility.