The fact that having a motorcycle in your life entails lifting it off the ground at least a couple of times a year is privy to no rider. If it hasn’t happened to you yet, it will.

That being said, most of us don’t know how to properly lift one- because it looks and sounds deceivingly easy. Much like attempting your first deadlift, it doesn’t beget a need to “know” how to lift the bike off the ground.

But motorcycles are not bikes with a lot more weight. They’re also much more complex both mechanically and ergonomically, with a lot more weight. For instance, if you forget to kill the engine while trying to lift a fallen bike, it’s still going to be running while on its side (if the bike is fuel injected)- a recipe for disaster as you’re going to be lifting it by the handlebars.

In this article, in addition to learning how to properly lift a fallen bike, you’re also going to learn how to lift a motorcycle with a floor jack.

How To Lift A Fallen Bike

i) Kill the engine

Due to the reason mentioned above, you should switch the engine off. Lest you (temporarily) end up operating a very fast lawnmower.

ii) Set the motorcycle in gear

Hold the clutch. Now set it in gear. Pretty simple.

Once the motorcycle is set in gear, the back wheel is locked in place. This also has the added benefit of not having to hold the brake while lifting the motorcycle up.

iii) Do a quick kick/ patdown of the motorcycle

You’re probably not going to be doing this at a showroom with spotless floors. There’s a good chance that a lot of loose gravel, dust and other things that will stain your jeans have accumulated on the fallen side of your motorcycle.

iv) Rotate the handlebars towards the ground

This is so the front wheel ends up oriented towards the sky. For leverage.

Make sure the stand is locked in place. You don’t want the bike to tip over to the other side when you lift it up.

You want to sit on this part not just to get away from the gravel and dirt, but also for an angle that will let your legs get as much leverage as possible, for reasons mentioned in step 6.

vii) Keep one hand on the handlebar, and the other on the rear fender

Your hand should be on the handlebar touching the ground (keeping it on the other will make it rotate and mess with your grip).

If your arms aren’t long enough, keep your strong arm on either the handlebar or the fender. This is to get the best grip possible while performing the next step.

viii) With the grip on the motorcycle as tight as possible, lean back keeping your feet anchored to the ground

In this position, use your body weight to force the motorcycle off the ground by pushing it with your legs. For those of you who do/ have done deadlifts before, think of this as a reverse deadlift.

How To Lift A Bike With A Jack 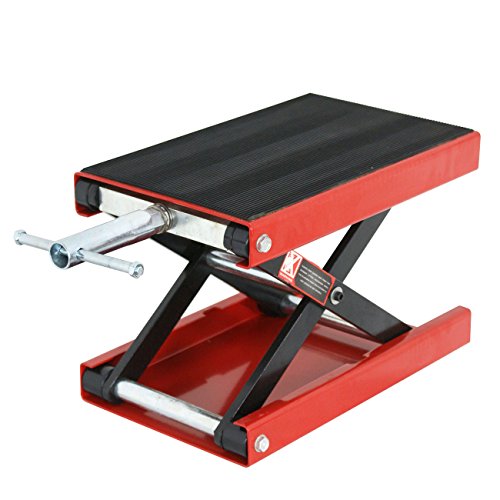 Jack lifting your motorcycle is very different from picking your bike off the ground. Lifting a motorcycle with a jack is done to do maintenance/ repair work on your motorcycle, which requires absolute stability.

The following steps are a mini-guide to lifting your bike with a jack. While it covers all the basics, we highly recommend you peruse the myriad of videos online that explain this process in depth.

i) Find a flat area

A flat surface such as concrete or asphalt will do.

ii) Inspect underneath your motorcycle

Inspect the underside of your bike while crouched on your knees. This is to make sure there is a flat surface under the engine to lift without adjustment. An uneven surface will cause the jack to lift unevenly and the bike will fall.

Have a friend hold the handlebars while they hold the brake lever, while you stand beside the rear end and coordinate while slipping the block under the kickstand.

iv) Use two ratcheting tie-down straps to tie the bike to the jack.

This is to keep the bike balanced while you work on it.

v) Position the jack under the bike

If you have a center stand, position it in the middle of the two rubber platforms on the jack.

Use the foot pedal to slowly raise the jack while keeping the bike as steady as possible by holding the handlebars. If it wobbles even a little bit, lower the jack and keep starting over until it doesn’t.

Place one under each wheel. Now release the jack and unlock the wheels. After this, slide it from under the bike.

After you make sure that the bike is a 100% steady, you can commence working on it.

Lifting a motorcycle, with or without a jack, takes practice to get good at. But with more practice, the more your skill level improves. Just make sure to do enough research to know that the information you’re getting is from legitimate sources, such as guides like these.