I remember checking out the newly released 2017 Road King at the New York City Flagship store in Long Island, two years back.

There were two groups of people present.

Those of us who were infatuated but had financial constraints.

And the rest who were infatuated without financial constraints.

As the salesman conversed with those in the latter group, I started a conversation with this kid from Stony Brook. He was in group 1 too. He had been riding for two years with a hand-me-down Honda DN-01 he got from his older brother.

“All I could afford after tuition was gloves. The stuff from Sena sets you back like 300 dollars, last time I checked.”

“How do you go on long rides then?” I asked, perplexed.

“I just wing it.” He chuckled.

“What if I told you that you could buy a system for a lot cheaper? Intercom mode and everything?”

And that, kids, is how Ryan bought the Uclear AMP Go… 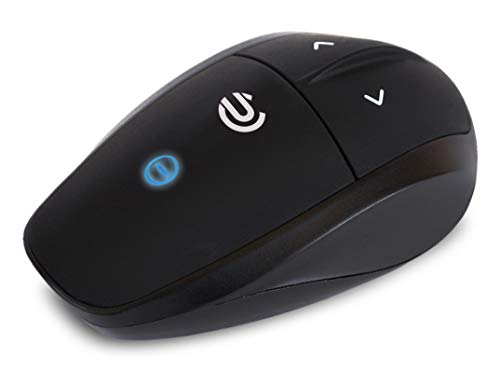 Awkward How I Met Your Mother references aside, if you’ve been riding for over a year, you know that an intercom is a must-have.

Most vehicles that aren’t yours have at least twice the number of wheels yours does. And weight. And momentum.

And yet, all they need is a smartphone.

Google Maps is a godsend, but it’s a huge pain in the ass to operate via voice commands. Especially with the wind-breaking your frantic attempts at trying to recalibrate the destination to Central Park from your phone misinterpreting it as ‘Parking Spots’. Seriously, Siri?

If you wear wireless earphones, they need to be noise-canceling amidst all the wind. The background noise won’t let you make phone calls unless you’re in remote areas.

But if they don’t, there’s a very high chance of you crashing into another vehicle.

Which is why us motorcyclists really have no other options other than getting an intercom.

They allow you to conduct voice calls and listen to music You can operate select apps on your smartphone. Most audio systems offer an intercom mode where you can connect to multiple riders in your vicinity.

The problem, however, is that their price range is way out of reach for most college students and young adults.

Cardo and Sena are wonderful, but they set you back a couple of hundreds of dollars.

Which is why the UClear Amp Go is your best bet.

About 1/3rd of the price of most intercoms on the market, the Amp Go offers more than a bang for your buck.

And these are just a few among the many perks worth mentioning. 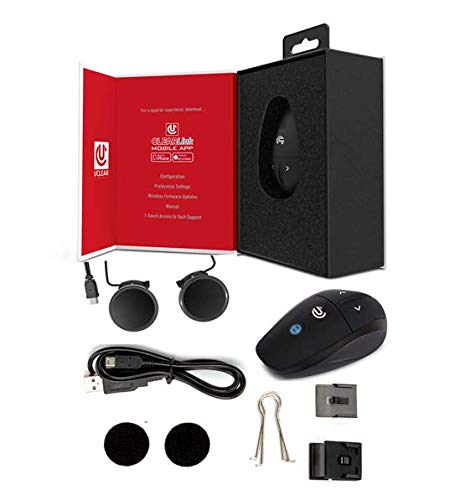 The intercom system allows up to 4 people to sync at the same time,  an impressive range for the price it comes under.

The system spans over a range of 300 meters.

The intercom also hooks up with Bluetooth systems from other manufacturers, not just other Uclear systems.

Another plus point is you don’t need to use a phone to set it up: your helmet will suffice.

Much faster in comparison to version 4.0 and 4.1, the reliable BlueTooth 4.2 version is a massive upgrade. Though not a 5.0 version due to the aforementioned low cost, it still holds it’s own.

You’re not just restricted to your phone and headset, you can also connect to other GPS systems and smartphones as well.

This is a huge boon, especially if you’re traveling in a group.

In situations where a person in your group is playing something on their phones and you want to tap into it, you can do it hands-free on your motorcycle. 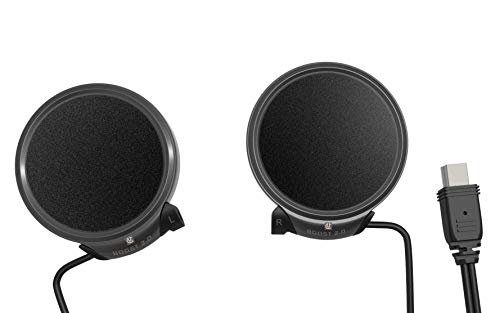 The Boost 2.0 speaker is not the Itzhak Perlman of sound systems, but for its price range, it still fares decently.

The music quality isn’t too much to boast about. But the voice communication makes up for it. Especially in open terrain (think deserts), where there is rarely any buffer.

While it does falter slightly at faster speeds, voice communication is pretty solid on a transfer to a transfer basis.

We were surprised at this premium feature present in a budget device: voice-command activation.

You can answer calls simply by saying “hello”.

This is incredibly convenient. Especially in situations where you would have stopped your motorcycle to pull out your phone only to have a “This is the IRS, pay $30,000 to us via bitcoin or you’re in jail buddy” phone call from someone who is not from the IRS.

Also, as is standard, a smartphone app is present for customization options- the ClearLink app. Although basic, it does contain a handful of gifs.

While not unusable, the ClearLink smartphone app comes with a lot of issues.

Being a supplementary app for a mobile device, it’s not fair to expect anything overtly fancy. But it does feel like a basic remote control with a screen on top.

Because apart from a handful of tutorial gifs and the basic controls, the app doesn’t have a lot to offer.

A lot of users also complain about the app crashing frequently. This is especially true after an update or phone reboot.

Luckily, voice-command technology resolves this, but for other functions, this may have no other resolution other than restarting the app.

That being said, most of these issues were observed in Samsung Galaxy S8 phones; the iOS apps reportedly fare better in this regard.

There are three controls present.

The Power button placed on the left side. And the volume up/down buttons split horizontally on the right.

Pretty standard, as far as most audio controls go.

The problem, however, is that your muscle memory will take a long while to get used to the different button codes you have to activate.

This is further aggravated by a delay in the button response. And can be annoying when you’re trying to rewind the DMT-inspired stream of consciousness by Joe Rogan mid-trip.

This can turn you off from using the buttons for functions other than switching it on and volume change.

Comparison with Sena and Cardo Intercoms 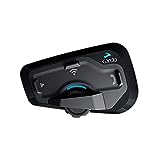 The Freecom 4+ and Sena 20s EVO are the flagships of both companies.

While these two products are top of the line, it would be unfair to levy the same expectations on the UClear Amp GO given the drastic price difference.

So, the following comparisons don’t condemn the UClear’s shortcomings, but highlight what it retains, despite the aforementioned price difference.

With a 4.2 version, as opposed to 4.1 offered by the other two, the connection provides a higher data range at a higher speed.

In this regard, the AMP Go pales in comparison to the FC4+ and 20S EVO. The latter has an intercom range for up to 2 kilometers, as opposed to a mere 300 meters offered by the AMP Go.

The UClear AMP Go allows as many connections as does the Freecom 4+: 4. The Sena 20S Evo allows for 8.

The Freecom 4+ offers an IPX7 rated waterproof/dustproof protection. The Sena 20S Evo, while not as certified, is pretty durable as well.

While the AMP Go is not flimsy by any means; it does not have any special kind of resistance to boast about.

The major takeaway (and USP) of the AMP Go- the price is a fraction of what the Freecom4+ and Sena 20S EVO are selling for.

What Should I Look For In An Intercom?

While manufacturers design products with the general interest of their audience in mind, it’s up to you to decide which product is best suited to you. And that depends on a lot of features, even non-technical:

Ask yourself the following questions:

And use the answers as a guideline. Other things to keep in mind are:

The AMP series most popular products are the AMP Go and AMP Plus.

While the default Go has a decent sound system, it’s nothing special.

But it lacks the extra oomph the Pulse provides.

In fact, a customer with the reputedly noisy Harley Road King who paired the speakers with Bear Claw earpads heard virtually no noise.

The UClear Go as mentioned above has a provision for up to 4 people to connect at the same time.

The UClear AMP Plus, however, allows up to 10 intercoms at the same time.

You read that right.

An intercom is a must-have, regardless of whether you’re riding within a city or across the country.
The navigation signals, phone synchronization, and modulation are too much of a safety risk to avoid.

If you’re in your late teens or early twenties and don’t have a lot of money to spend, the UClear AMP GO is the best bet.

Because you won’t find a quote for any other intercom as low as the Price not available for the features it provides.