Life isn’t fair most of the time.

Back in 2011, my brother got t-boned by a car that ran a stop sign onto a country road.

It wasn’t exactly a hit and run…but the driver did leave after 2 minutes of them exchanging verbal blows. And exchanging their number plate details.

My brother was lucky to be in full-body gear (reminder), but his motorcycle wasn’t.

The frame on the right side was damaged and his front forks and radiator were bent hard.

He took the guy to court, but his lawyer didn’t have a lot to work with.

There were no street cameras, and this being the deep country, no eyewitnesses either.

The driver got off scot-free.

My brother had to pay close to $5000 (and this was when his business was slowly picking up after the 2008 recession).

All of this could have been avoided if he had video evidence.

Smartphones just don’t cut it in situations like these. And GoPros aren’t convenient enough to latch onto your helmet every time you hop on your motorcycle (we do admit the RedBull action camera videos look dope though).

This is why so many people get dashcams.

All of us love our motorcycles to death and have spent ungodly amounts of time trying to save up for them.

But in he-said, she-said situations like these, all that time you put in could go to waste if you don’t take adequate precautions.

The extra couple hundreds of dollars you spend are key- as riders, we know that no matter how precautious you are, there are always other idiots on the road.

And dash cams are insurance against these idiots. Because you have irrefutable proof.

Very well priced, recording high-quality footage and easy to install,  the DVR modules are two among the most popular in the dashcam niche.

This is why after a lot of research and customer reviews, we narrowed it down to these two dashcams alone.

And how you can pick the one best suited to you. 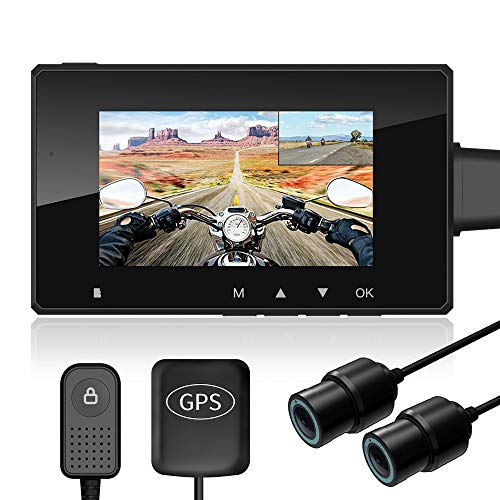 Good video quality for its intended purpose: While the footage isn’t IMAX worthy, it does a pretty good job going by utility alone. The front and rear cameras do their job well. Distortion due to wide-angle optics is present (as expected). But the recorded footage is more than good enough to show to the cops.

Well packaged: Upon opening the box, you see the DVR module, manual switch and both cameras neatly laid out on top.

After lifting, you see how neatly the cords are tucked underneath. As is the USB power connector.

Coated with white interior foam, the design of the package is very creative and a delight to use.

Easy installation: Everything is color-coded. All you have to do is mount both cameras, the switch and GPS unit (and plug the cords accordingly). Very easy to figure out. 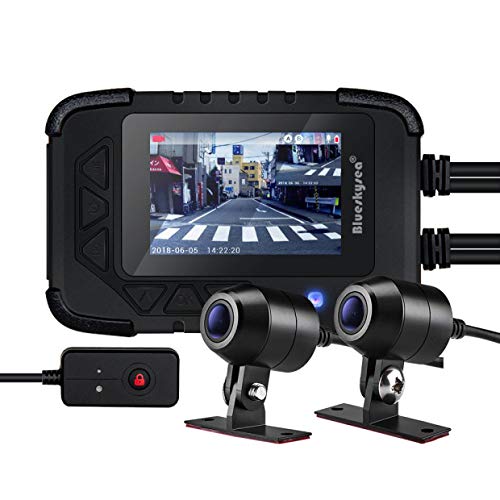 Waterproof: Everything from the case to the wiring to the mounting system is waterproofed. This is a huge boon if you live an area prone to heavy monsoon- a waterproof case is present as well.
In fact, the system is rated an IP67, meaning it can be submerged into a 1m deep body of water for up to 30 minutes.

Affordable pricing: For the quality of the video footage provided, the Blueskysea is surprisingly underpriced. 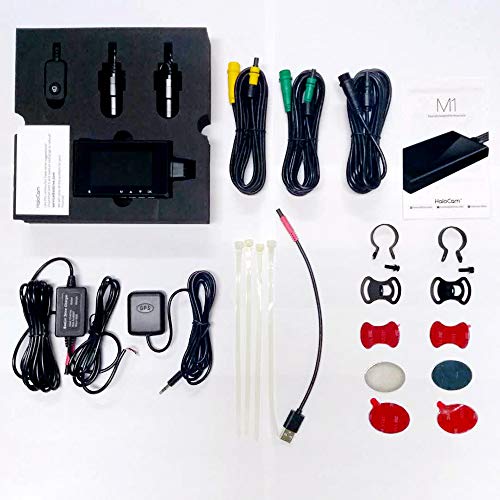 Occasional ‘break’ by the video recorder: Sometimes, the footage recording abruptly stops for a very short while, then starts again.
This leads to a “stuttery” feeling while the camera records.

While the device does lock the video most of the time, this may cause some minor hiccups during playback.

DVR is not waterproof: While the manufacturer says the lens is waterproof, but there is a slight misconception. Heat shrinking tubes and waterproof lenses are used to protect the device in an of itself, but not the rest of it. Mainly the binding.

A waterproof case is present, as are the front and rear cameras – but the monitor is not.

The magnet binding has a good chance of being damaged by water as well. 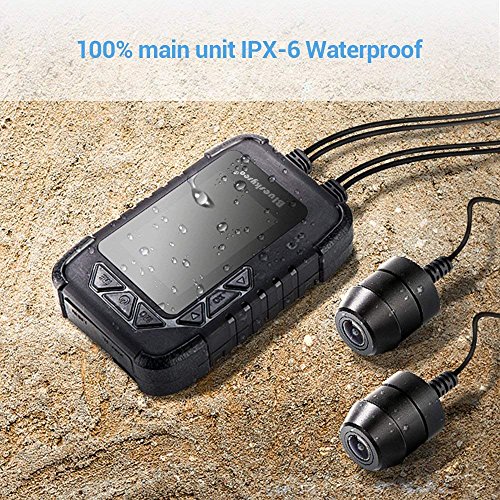 Wires can be too long: The front and rear cables are 2.5 and 3.5 meters long respectively. This can get annoying while riding your motorcycle.

The rear camera needs to be readjusted after every bike trip: The rear camera has been reported to fall off due to accumulating vibrations every once in a while.

What suits me better?

The Halocam has dual 1080p video recording lenses curated by Sony, with the innovative built-in Sony image. It also contains a 155-degree wide-angle for more capture.

The latter has dual lenses that record 1080p video as well, with a 130-degree wide-angle screen.

Due to the difference in the viewing angle, the HaloCam has slightly better distortion.

While both cameras are more than adequate for recording footage, you may want to go with the Halocam if you prioritize video quality.

*However, note that the Blueskysea comes with an innovative 960*480 dots display, making footage during night time brighter than most dash cams.

The wi-fi capability for the Halocam, combined with the app allows you to see everything the camera records in real-time.
However, this is not present in the BlueSkySea.

The Blueskysea (DV 688 version) beats the Halocam in this regard.

While the latter has waterproof lenses, the whole DVR module is not the same.
In fact, your dashcam may effectively be ruined if you don’t quickly store the Halocam in a plastic baggie during unexpected rain.

On the other hand, the whole DVR module including both the monitor and camera lenses are rated IP67 waterproof.

For those of you living in monsoon-prone areas, this could be a dealbreaker.

While both dash cams are very affordable, the HaloCam M1 is slightly more expensive. The Blueskysea is cheaper by approximately 20 dollars. That’s three 6 packs.

The Halocam M1 comes with a GPS unit. The BlueSkysea DV 688 however, does not. There is an option for GPS provision but you’re better off using your phone.

The BlueSkySea has a 2GB internal storage, extendable for up to 128 GB.

The Halocam M1 has no storage and requires a memory card (again, max 128 GB).

However, we highly recommend getting high-speed memory cards for both devices because you’re recording for long periods of time from two cameras.

Installation methods for both DVR modules are straight-forward.
For the HaloCam M1, you mount the front and rear cameras.

Then mount the GPS device they include. Then the manual switch. After which you find places on your motorcycle to hide the wires and plug them into the DVR.

The same goes for the BlueSkySea – but without the GPS device (unless you opt for this option).

Where they differ is how easy the packaging has made it for both modules- and in this regard, the HaloCam M1 has the BlueSkySea beat.

The HaloCam M1 has much better packaging and much better color-coded directions provided. It’s not a mammoth of a task for the BlueSkySea, but it’s almost as simple as “plug and play” for the HaloCam M1. 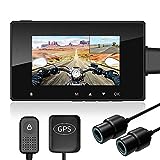 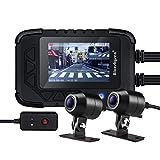 Both DVR modules are exceptional in what they do and offer more than a bang for your buck.

The BlueSkySea has inbuilt memory, waterproofing for the complete DVR module and is lower priced.

There is no clear winner among either of these systems, the one with the qualities you prioritize is the one you should pick.

But you should pick one.

Because you can do everything right when you hit the road.

But there is still a margin of error for accidents that exists- and this margin is out of your control.

While dashcam video montages on Youtube are fun to watch- they serve an important purpose. There’s a reason most of this footage is from sparsely populated areas in open country.

While this may seem trivial or unlikely to happen to someone like you, one incident is all it takes.