The Auto-Cycle Union (ACU for short) is the official authority on the affairs of motorcycle sports in Great Britain.

For those of you living across the pond, Great Britain is the United Kingdom minus Northern Ireland.

Aimed at developing the sport of motorcycling through various clubs, its genesis was in 1903. Nearly six score years ago.

For those of you who haven’t watched Lincoln, that is a hundred and twenty years. (“Score” is archaic speak for twenty.)

But the earliest races conducted by the ACU saw radical changes. Races where the fastest rider won, as opposed to the original style, where the delicate balancing of motorcycle riding was scrutinized, became popular. They were called “hare scrambles”. As they grew further in popularity, they garnered international interest over time. Today, this sport is known as motocross racing.

For those of you who- you know what, nevermind. You know what motocross is, that’s why you clicked on the title of this article.

So I’ll answer the question in the title of this article before you read the rest of it.

Especially if you intend on partaking in any kind of motocross riding. But they come with other benefits too.

Just like most purchases, you need to do your research on handguards before you settle on buying one. This is why we wrote this article- so make sure to carefully go through it.

Hand And Wrist Injuries In Motocross

Motocross is an extremely popular sport- one in which millions of people worldwide partake in. And it’s only gaining in popularity.

Gaining so much in popularity in fact, that a UK study on motocross in the country reported that the number of annual tournaments and racers had doubled from 2010 to 2015- the time period during which the study was conducted.

However, the study reported something alarming. The number of hand and wrist related injuries- including ones that required surgical operations- had quadrupled during the same time period.

What it also found was that hand and wrist injuries didn’t just increase in number. They also commanded a particularly large percentage of injuries. 240 injuries among 615 to be exact.

And among the 240 people who were injured, 96 of them required operative treatment.

The study concluded that in spite of the use of personal protective equipment, motocross was still a high-risk sport. This means that gloves and gauntlets are necessary- but the risk in the sport is so high that safety gear alone may not mitigate it.

Which is why you need additional equipment to use in tandem with gloves. Equipment that doesn’t just protect your body, but protects your bike as well.

What Is A Motorcycle Handguard?

The basic definition of a motorcycle handguard is pretty self-explanatory: it guards your hands against external elements. And by external elements, we mean the wind, water, the cold, mud, and other things that our editors may or may not allow to type.

Not only is it unpleasant to have your gloves/ hands take on these elements- but it can also be dangerous.

When sharp objects. such as those found in

Which disrupts the undivided attention you need to devote to riding fast in the rough terrain and pit trails found in MX racing. And when coupled with the right (read: wrong) timing, it has a high chance of resulting in a situation that would put you in the statistics listed above.

Why You Need Motorcycle Handguards

Advertising and social media have instilled a scary level of FOMO in most people. This causes us to spend a lot of money on unnecessary crap. A lot of which is money that would have been much better spent elsewhere.

Those of us in the motorcycling community are not exempt from this. And the subject of “areas that need more money to be spent on them” is especially relevant to the one being discussed in this article.

Engine guards prevent your bike from developing a cracked crankcase and broken clutch, result in only an annoying drop instead. Pretty good deal, considering that the alternative could potentially set you at least $800 back when you factor in labor costs. (Replacement cost for a crankcase is $500 and a broken clutch is $300 on average.)

Which is why it’s weird that more people don’t have them installed on their motorcycles.

And handguards are second to only engine guards when it comes to the safety proofing of your motorcycle. Which is why it’s almost as ridiculous that more people don’t have them.

The utility of motorcycle handguards isn’t limited to the confines of MX racing alone. You’ll find a lot of use for these bad boys outside the trail pit too. Some of which include:

i) They protect your hands from bad weather

Handguards don’t just shield your hands from dirt and gravel- they protect them from nature’s elements as well. The air pocket formed by your handguards diverts most of the rain, wind, and cold you cut through while riding.

Used in tandem with items like waterproof gloves and heated grips, you can be sure that all 100% of your hands are covered.

Every time the bike falls on the ground, everything in the vicinity of the handguards- especially wrap-around handguards- stays untouched. Which includes your brake and clutch levers. Not only do both of them cost a lot to get replaced, but the time required to replace entire lever systems is a pain as well. That means an involuntary hiatus (gasp) from riding for at least one week while also having a lot of money down the drain.

There’s a reason we used the engine guard example above- handguards save you a ton of money. We’re talking hundreds of dollars for an investment that won’t cost you more than a hundred dollars.

iii) In the case of a serious accident, metal handguards protect your hands

Borrowing from above, everything in the vicinity of the handguards, INCLUDING your hand, stays untouched.

What does that mean?

You could have a car ram into your motorcycle from the side. Or your bike could crash into a stray moose (or an animal of similar size in most states not called Alaska) on an empty highway. Or face any unexpected situation in which a sudden collision causes your bike to sustain a large force of impact.

But the design and composition of handguards- provided you purchase them from established brands (on which we will touch upon later)- is such that the maximum possible force of impact is diverted away from your hands and wrists.

Now, the type of handguard you need to buy depends on what you want out of your handguards.

Is protection your number one priority? Do you want versatile guards with pivots that you can play around with? Or are you running tight on money and looking for something temporary but budget-friendly to get a feel of how handguards operate before you settle on something permanent?

The answers to the above and any other questions you might have are rooted in the design of the handguard. Which we’re going to cover in this section.

Also known as open handguards, this design is the most common. These handguards are designated as “open” because the design of the outside is open-faced. The intention behind this design to protect against roost and high-speed winds.

These handguards are generally mounted on the inside of the handlebars. Usually made of plastic, open/ MX handguards are also, on average, the most affordable.

As you can probably tell from the name, these handguards are designed to wrap all the way AROUND your handlebars. Meaning they mount both on the inside AND the end of your handlebar.

Wrap-around handguards have the same function as standard handguards- protecting your hands from roost and strong wind. But due to the “wrap-around” design, they do it much better. In addition to this, as we mentioned above, wrap-around handguards are the ones that completely protect the levers of your bike from any kind of impact when it falls or tips over.

The design of metal bar handguards is very different from that of the other two handguards. Made of tough metal with a minimalist single-bar design, these handguards may not do a very good job of protecting your hands from roost and wind.

But they do an incredible job of dealing with dense vegetation.

The primary purpose of metal bar handguards is to prevent tree branches and thick brush from grabbing at the brake and clutch levers on your motorcycle. Basically speaking, they’re the lumberjacks of handguards. Which is a weird analogy, but we’re keeping it.

Understandably, metal bar handguards are not as popular as the other two due to the niche they fall in. They find the most utility in desert areas with plenty of low-growing thickets- areas where the most dangerous elements to your hands grow on the ground (and not wind, snow, or rain).

But within the niche they serve, their utility is unparalleled.

5 Of The Best Motorcycle Handguards 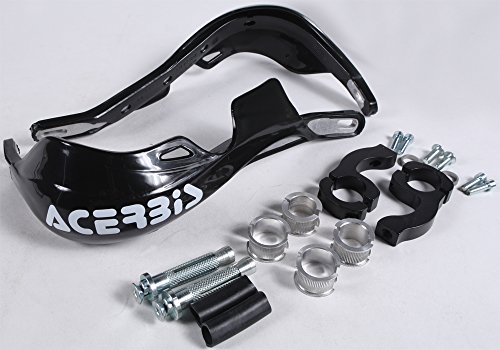 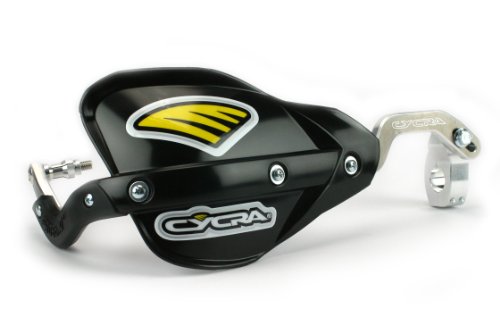 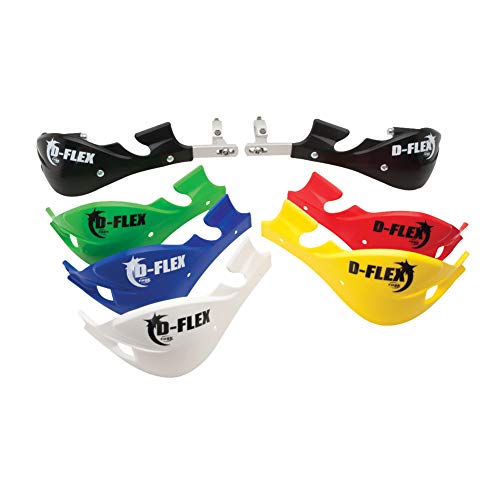 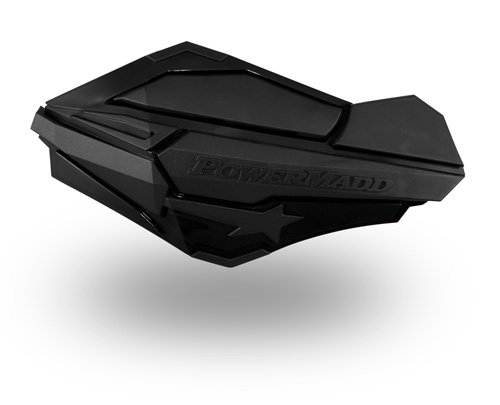 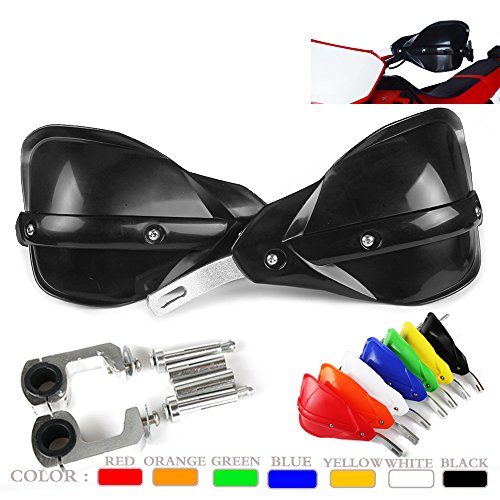