That was Louis CK on WTF With Marc Maron, back in 2010. He was doing 70 miles down second avenue in Manhattan. This was in the late eighties, when he was around 22. He had been doing stand-up for about 4 years at that point. He was riding a motorcycle in NYC so he could get to shows quicker.

The incident he was narrating was about a major motorcycle accident that he got into. A car ran a red light and plowed right into his motorcycle at a perpendicular angle before he could even touch the brakes.

Thankfully, nothing in his body was broken but his back really hurt- and he could barely walk for the next 2 weeks. In the podcast, he said that for a couple of years, everything in his life went badly after that point.

Back Protectors And Spinal Injuries

Listening to Louis’ story got me thinking.

But there’s a reason so much ink has been spilled over how dangerous it is in popular culture. And as motorcycle riders, we know more than most people about why motorcycles are so overrepresented in statistics about traffic accidents.

However, as a motorcycle rider, you also get to exert a certain degree of control over how much these risks can be mitigated. By riding carefully. Being aware of your surroundings. Knowing when to pull over. All that jazz.

But one of the biggest factors, by far, is how much protection you get for your body. In the form of riding gear.

And this article is about a type of gear that protects one of the most important parts of your body- your back. Your spinal cord and central nervous system to be specific.

Multiple studies have discovered spinal injuries to be among the most disabling back injuries. In fact, they have a median 25.8 % chance of resulting in lifelong consequences.

Furthermore, as most of these injuries happen to young people, they result in a huge financial burden on their lives. Even more so if there are other people depending on them (as there often are).

Due to the debilitating injuries sustained, the most financially productive periods of their lives are significantly altered.

But an analysis of 185 studies found something incredible: when it came to dealing with injuries to the spine and central nervous system, wearing a back protector helped. Tremendously.

Infact, riders wearing back protectors ended up with 3x fewer injuries than riders who only wore foam inserts in their motorcycle jackets.

After going through the above, you now have the answer to the question you raised while clicking on this title: yes, motorcycle back protectors do work.  And the rest of this article answers all of the other questions you’re about to raise.

History Of The Motorcycle Back Protector

“Fast Freddie” was an American motorcycle racer. While now an old man, he was widely regarded to be one of, if not the greatest racers back in the 80s.

Frederick Burdette Spencer started riding at the ridiculously young age of 4. He won numerous dirt track racing events near his hometown of Shreveport by the time he was 11.

Now that you know his early track record, it shouldn’t surprise you that he also went on to hold on to his AMA Superbike victories for a span of almost 16 years. Which was the longest by anyone in the history of the event conducted by the American Motorcyclist Association. Quite the individual.

However, his insane record may have been cut short early. Because in 1984, something almost happened that would have put a full stop to his racing career. And probably his life.

While practicing for the World Championship at Kyalami, the rear wheel on his bike exploded mid-riding. His back smashed against the hard concrete on the curb.

There’s a reason I underlined “almost”. Because before practice, his advisor Lino Dainese insisted he wear a back protector. The name may sound familiar to many of you. Because Lino Dainese is the founder of Dainese- one of the most established brands of motorcycle PPE today.

Hadn’t Freddie worn Lino Dainese’s back protector that day, he would have been carried away on a stretcher to an ambulance instead of getting up and shrugging it off.

Why this story? Because until then, back protectors were relatively obscure. The first back protector was never even created until the year before the decade started, in 1979. By Lino himself.

Which he designed by combining a soft layer of foam rubber with a series of rigid interlocking plates. The reasoning behind this was to distribute the force of impacts over a wider surface in a pre-calculated manner. And on the day Freddie could have very easily lost his career, it did exactly that.
It was so effective in fact, that Freddie’s example set a precedent for future motorcycle racing events. Back protectors soon became an indispensable part of every rider’s kit within just a few years.

The Difference Between CE1 and CE2 Back Protectors 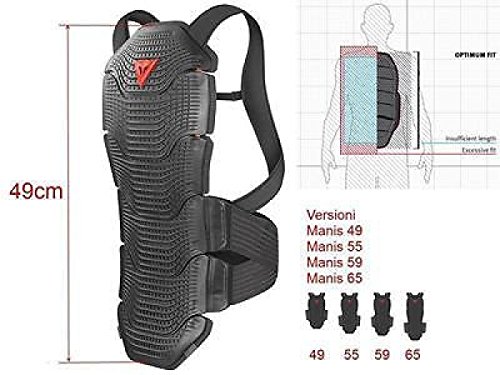 Your back constitutes the largest posterior area on your body. Going just by pure surface area metrics alone, your back is the part of your body most likely to sustain impact.

Manufacturers keep this in mind when designing back protectors. Which is why they’re designed to cover as much of the area on your body lying in between the collar and trousers as possible. These are the areas most likely to affect the spine and central nervous system upon impact.

But the level of protection offered by a back protector depends on a lot of factors- and this level is determined according to the adherence to certain safety standards that are set in place by governing bodies. And as most reputable brands that manufacture motorcycle armour are based out of the European Economic Area, there are two such levels: CE level 1 and CE level 2.

(CE is an abbreviation for Conformité Européenne, which is French for “European Conformity”)

Now, if the back protector doesn’t come with any CE ratings, it means one of either two things:

(We highly recommend sticking to CE certified products. If the back protector you buy is manufactured outside Europe, you need to do a lot of research on the certification of both the product and the brand. This is also why the only non-European back protector featured in the next section is by Joe Rocket- a Canadian brand that is one of the most well-established in the industry.)

The difference between CE1 and CE2 levels is very simple- the latter is better at protecting your back than the former.

Want to get a little more technical?

The CE ratings are determined by the safety standard known as the EN1621-2:2014 (which is the latest rating for back protectors sold within the EEA as of May 22nd, 2020).

The standard awards CE Level 1 and 2 protectors according to the following parameters:

*To know more about this subject, this webpage goes into detail.

5 Of The Best Motorcycle Back Protectors 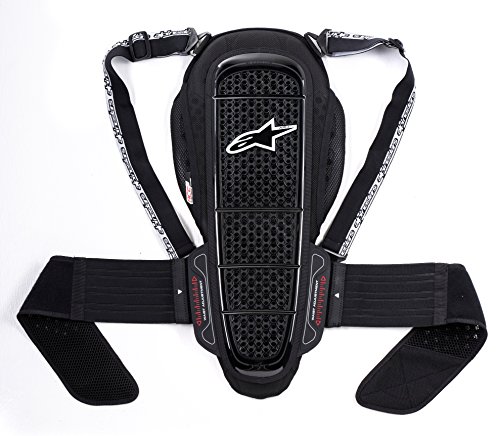 The KR-1 utilizes a viscoelastic memory foam that is impact-absorbent, extremely comfortable, and lightweight. Which is the reason for its 6kN safety rating- surpassing the 9kN standard set by the CE Level 2, the highest standard.

Designed for the track, it can be worn under any kind of sport touring jacket. Covering a waist-to-shoulder length ranging from 16 inches to 21 inches, the jacket fits most people.

There are wings behind the KR-1 that allows you to adjust up and down the waist strap and also has an adjustable shoulder strap. It’s worth noting that these straps allow for a perfect fit to the Nucleon KR-C chest protector. 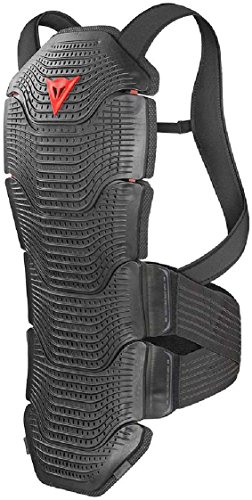 The Dainese D1 59 back protector comes with perforated polypropylene-based external plates for controlled mobility. The comfort padding is also hyper-localized so that the areas of your back that require the most comfort receive the most comfort.

The back protector comes with 4 degrees of freedom:

The absorption material consists of a special material patented as “Crash Absorb”. A water-repellent elastic-visco nitrile rubber, it adapts perfectly to the shape of the body and ensures an optimum fit. 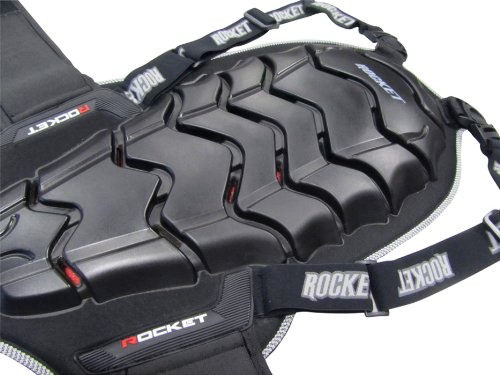 The Joe Rocket Speedmaster 2.0 is one of the most comfortable and non-restrictive back protectors available on the marketplace. Who knew- the right combination of 3D sculpture and manual articulation can go a long way.

The ventilated honeycomb design helps massively with added heat and humidity dissipation. Combined with foam backing, the result is an extremely lightweight and breathable back protector. 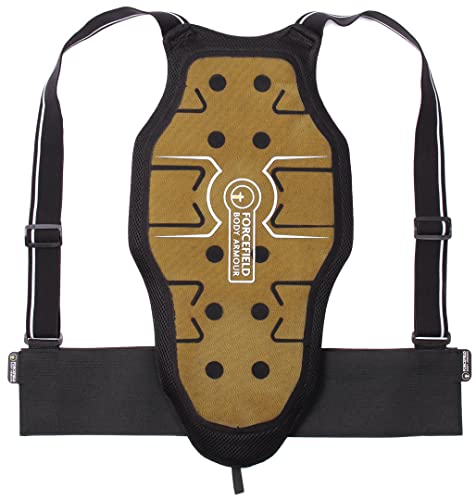 Forcefield has been making body armor for motorcycles for over 25 years. And the expertise they’ve acquired over the decades reflects in their Freelite Back Protector. 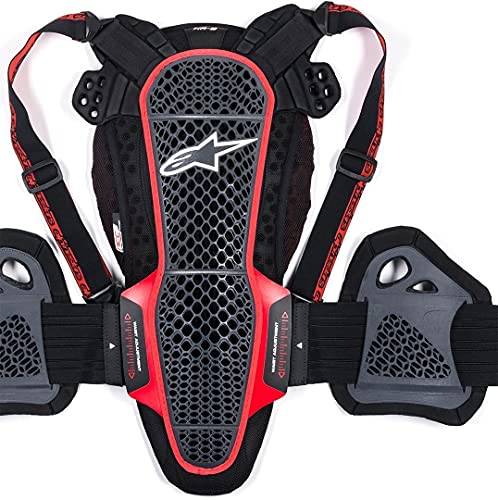 Another product from the Nucleon KR line, it also uses a hard shell backed with a soft viscoelastic PU foam compound. Highly flexible and breathable, it is engineered for maximum performance.

The ergonomic design both absorbs forces at high impacts AND allows the maximum airflow possible.

The KR3 comes with 3 waist-to-shoulder dimensions in order to cover all body sizes. It also has a lattice-structured back shell plate constructed from polymeric material for optimized flexibility and excellent weight-saving properties

It comes with nucleon PU foam on the inside of a convex central hard shell for the central spine. An adjustable rib protector constructed of high-performance polymeric material helps blend for additional side protection. It also comes with protective padding extensions for the shoulder blade to protect your acromion bone. A slim vented kidney belt is present for added position stability and security.